Dahlia Flowers: Remarkable Of The Night 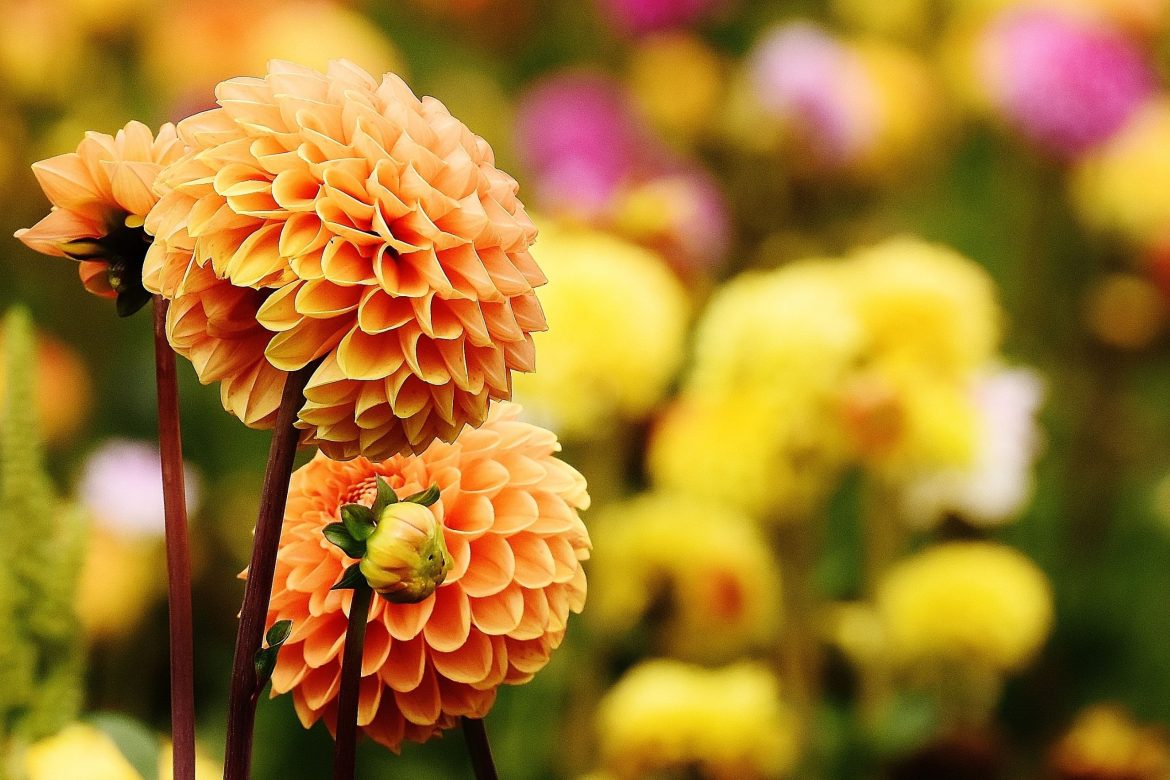 Dahlias are beautiful flowers that come in a variety of colours. They have a rich history and symbolism that spans many cultures. If you’re looking to add some dahlia flowers to your garden or want to know more about their meaning, keep reading! This flower is a type of flower that has several different meanings and symbolism depending on the culture. In the United States, for example, dahlias symbolize elegance and grace, while in Mexico, they are seen as a symbol of strength and independence. They are also a popular choice for weddings and other special occasions.

These flowers are native to Mexico, where the Aztecs cultivated them. The dahlia was named after Swedish botanist Anders Dahl. It was introduced to Europe in the 18th century and became popular in Victorian England.

It is a flowering plant that is native to Mexico. It was first discovered by Spaniards in the 16th century, who brought it back to Europe. It is a member of the Asteraceae family, including daisies, sunflowers, and chrysanthemums.

They come in two primary flower forms: decorative/incurved, which have petals that curl inward, and cactus/semi-cactus, which have straight or slightly incurved petals. The flowers may be any colour except blue and occur in many shades of yellow, white, pink, purple, red and brown.

Suppose you’re looking for a flower that will make a statement, opt for one of the show-stopping varieties like ‘Bishop of Llandaff’, with its deep red petals, or ‘Gallery Art Deco’, with its striking black and white blooms. If you’re after something a little more subtle, go for a dainty pom-pom dahlia like ‘Bishop of Auckland’ or a pretty cactus dahlia like ‘Kristin’.

To know which flower type is right for you, it’s essential to understand the different types.

Single dahlias are a symbol of purity, simplicity and innocence. In the language of flowers, they represent commitment and lifelong bonds. Colleretta is a large, flat flower head with a collar-like ring of petals around the centre disk. The name “collerette” comes from the French word for “collar.” Collerette is one of the most popular types. They come in a wide range of colours, from white to yellow to orange to pink, red to purple. They bloom from late summer to early fall.

Waterlily is one of the most popular types. They have large, flat blooms that resemble water lilies. The colours can be various, including white, pink, red, and purple.

Decorative is the showiest of the clan, with large, often double flowers in various colours. They range in height from 2 to 6 feet and make excellent cut flowers.

Balls are one of the most popular varieties. They have large, round blooms in various colours, including white, pink, red, and purple. The flowers can grow up to 8 inches in diameter. Balls are perfect for cutting and adding to bouquets or arrangements. Pompons are small, round flowers with petals that are rolled inward. They are often used in corsages and boutonnieres. The name “pompon” comes from the French word for pom-pom.

Cactus is unique among all dahlia varieties in that their flowers have petals that point sharply outwards, resembling the spines of a cactus. The tips of the petals are often hooked or barbed, giving them an extra sharp look.

Semi-Cactus is a type characterized by its cactus-like appearance. The petals of these flowers are often sharp and pointy, giving them a prickly look. However, don’t let their eyes deceive you – Semi-Cactus are delicate and require special care when handling them.

If you’re looking for flowers to make a statement in your garden, Semi-Cactus is the way to go. These unique flowers are sure to turn heads and add a touch of intrigue to any space.

Miscellaneous doesn’t fit into one of the main types. They can be single or double-flowered and come in many colours. They were initially grown as ornamental plants but became famous as cut flowers. They are now grown worldwide and come in various colours and sizes.

Fimbriated have fringed or ruffled edges on their petals. They come in various colours: white, pink, yellow, red, and purple. Some fimbriated also have variegated leaves.

“fimbriated” comes from the Latin word fimbria, which means “fringe.” Fimbriated are named for their fringed petals, which resemble the fringes on a shawl or scarf.

Single Orchids are with one layer of petals around a central disc. They come in many colours: pink, purple, red, white, and yellow. Single Orchids are some of the most popular due to their wide range of colours and easy-to-grow nature. Double Orchids have full, double blooms of various colours. They are one of the most popular varieties and can grow large.

Peony-flowered is big and showy, with full, ruffled blooms in various colours. They’re named for their resemblance to the famous garden peony flower.

These flowers come in a wide range of shapes and sizes, but they are all unique in their way. They have a long and rich history, dating back to the 16th century. They are often associated with luxury, love, pride, respect, and elegance.

They are also considered to be symbols of joy and happiness. In addition to their beautiful blooms, dahlias are also known for their strong fragrance. Many people find this fragrance to be quite intoxicating.

It represents dignity, elegance, and pride. They are often used to symbolize success and an appreciation of the arts.

Some are edible tubers, while others are used for their flowers. These flowers can be used to cut flowers, either fresh or dried,  and they can also be planted in the garden to add colour and interest. They are a favourite flower of many gardeners because they are so versatile.

The meanings of popular flowers can vary depending on the colour of the bloom. Here are some general purposes associated with different flower colours:

Essential Tips for Planting Dahlia In Your Garden

Here are some essential tips: These are beautiful flowers that come in a variety of colours. They are often used in arrangements and make a great addition to any home. Here are some care tips:

What Does A Dahlia Tattoo Mean?

Flower tattoos can have various meanings, depending on the specific design. Generally, they are seen as symbols of strength, courage, and determination. They can also represent beauty, elegance, and grace. The flower tattoos may also be chosen simply because the wearer loves the look of the flower. Whatever the reason, tattoos are eye-catching and make for beautiful body art.

What Is The Dahlia Flower Used For?

The flower is a genus of bushy, tuberous, herbaceous perennial plants native to Mexico. A member of the Asteraceae or sunflower family, they are related to chrysanthemums, cosmos, zinnias, and other plant family members.

The dahlia is not poisonous, but all parts of the plant contain saponins which may cause stomach upset if consumed in large quantities. The dahlia is related to the sunflower, daisy, zinnia and marigold. Dahlias are native to Mexico and were introduced to Europe in the 18th century.

What Do Black Dahlias Mean?

While dahlias of all colours are beautiful, there is something incredibly stunning about black dahlias. These flowers are often associated with mystery and the unknown, making them the perfect choice for someone who wants to add a bit of intrigue to their floral arrangement. Black dahlias can also symbolize strength and power, which makes them an excellent gift for someone you admire.

What is a dahlia tuber?

A dahlia tuber is the underground stem of a dahlia plant. The tubers can be stored in a cool, dry place over the winter and replanted in the spring. Dahlias are hardy plants that can be grown in most parts of the United States.
The tubers grow best when they are planted in late spring or early summer. Dahlias come in many colours, including white, yellow, pink, red, and purple. They make a beautiful addition to any garden.

How many dahlia plants can I get from a tuber?

You can get quite a few plants from one tuber. It depends on the size of the tuber and how many “eyes” it has, but you could probably get anywhere from 3-10 plants. If you want to get really many plants, you can cut the tuber into smaller pieces, each with an eye or two. Then just plant those pieces and wait for them to grow.

How many flowers does a dahlia produce?

A dahlia produces one or more flower heads, which are composed of the flowers themselves. Each flower head can have up to 100 individual flowers.

What happens if you leave dahlias in the ground over winter?

If you live in a colder climate, most gardeners will lift their dahlias tubers out of the ground and store them in a cool, dark place over winter. You can also mulch your Dahlia tubers with leaves or straw to help keep them from freezing.
If you live in a warmer climate, you can leave your dahlias in the ground over winter, but be sure to protect them from frost and cold weather. One way to do this is to mound soil or mulch around the base of the plants to keep the tubers warm. You might also want to cover your plants with a sheet or tarp if there is a severe cold snap.

What happens if you don’t divide dahlias?

If you don’t divide dahlias, the clumps will get bigger and bigger each year. Eventually, the centre of the clump will die, and the outer parts will start to look sickly.
Dahlias should be divided every 2-3 years. digging down to find and remove the rootball, then replanting it elsewhere in your garden. Make sure to water well after planting.

Can you split a dahlia plant?

Yes, you can split a dahlia plant. You’ll need a sharp knife or spade to cut through the roots, and then you can replant each piece with enough soil to cover the roots. Make sure to water the plants well after replanting.