Ginger Flowers: How to Grow and Care for these Great Flowers 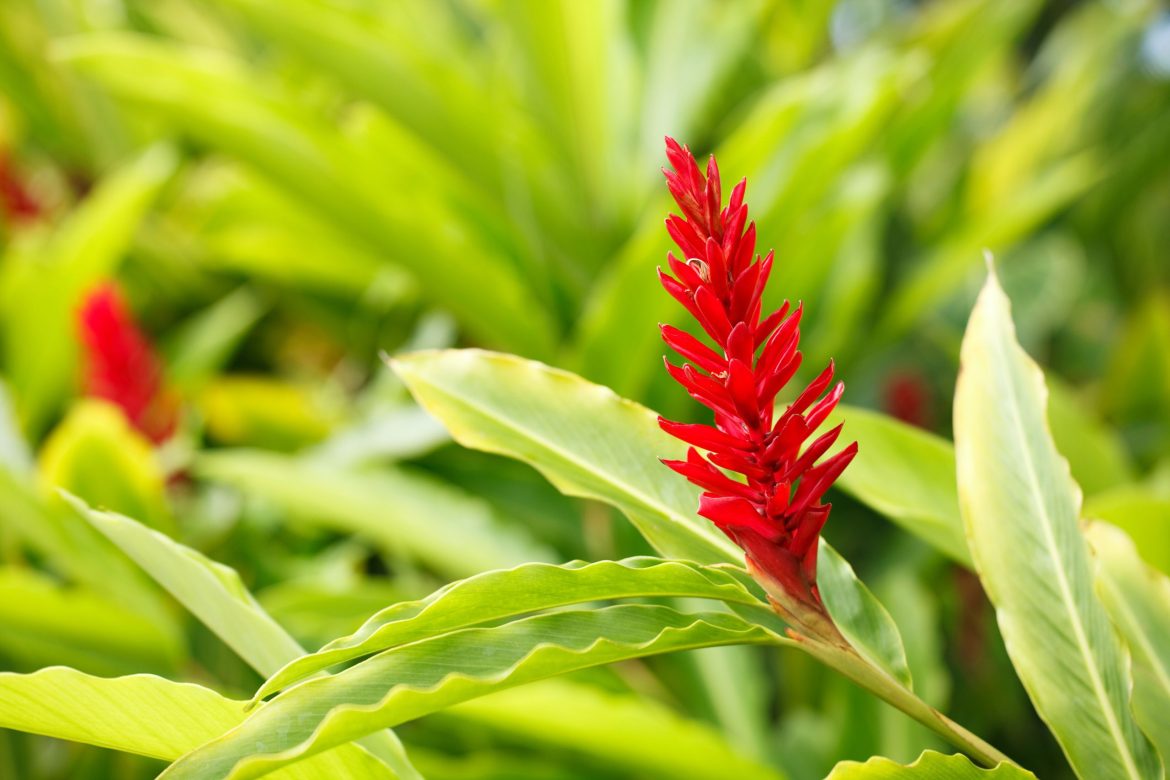 Do you have a ginger plant? If so, you may be able to get it to flower. Flowering ginger is not only beautiful but the blooms can also be used in a variety of ways.

Here are some tips on how to grow and care for your flowering ginger. The ginger flower is native to tropical Asia and has been used in folk medicine for centuries. The plant is a member of the Zingiberaceae family, which includes turmeric, cardamom, and galangal.

The ginger flower is a beautiful, fragrant bloom that can add a touch of elegance to any garden. The plant is relatively easy to care for and can be grown in various climates.

The ginger flower has a long, thin stem that bears several delicate, brightly-coloured petals. The flowers are typically red, orange, or yellow and have a strong ginger scent. The plant blooms from summer to fall and prefers warm, humid conditions.

There are many different types of ginger flowers, each with its unique appearance and fragrance. Some of the most popular styles include:

Hedychium coronarium, commonly known as a white ginger lily or butterfly ginger, is a species of flowering plant in the ginger family Zingiberaceae, native to Laos, Vietnam and Yunnan in southwest China. Growing to 3–6 m (10–20 ft) tall by 2 m (6 ft 7 in) wide, it is a rhizomatous perennial with erect stems bearing narrow, lance-shaped leaves and sweetly scented, highly decorative flowers in summer and autumn.

Malay ginger (Zingiber montanum) is a species of ginger that is native to Southeast Asia. It is used as a spice and as traditional medicine.

Malay ginger has a strong, pungent flavour and a slightly sweet taste. It is often used in curries and other savoury dishes. The plant is also used in traditional medicine for its purported medicinal properties.

Alpinia zerumbet is a species of ginger that produces beautiful white and pink flowers. The plant is native to tropical Asia but is grown as an ornamental plant in many parts of the world.

This type of ginger is often used in landscaping because it can add beauty and interest to any garden. The plant is easy to care for and does not require much maintenance.

There are wide different varieties of ginger flower; some of the most popular types include: The beehive ginger plant is a perennial herb that is native to Asia. It is a member of the ginger family, and its scientific name is Zingiber officinale. The plant grows to about 2-3 feet and has large, oval-shaped leaves. The flowers are small and white, and they grow in clusters. The ginger root is used in cooking and has a robust and spicy flavour.

Beehive ginger is easy to grow and care for. It prefers a warm, humid climate and does not tolerate frost. The plant needs full sun to partial shade and well-drained soil. Water the plant regularly, especially during the summer months. Beehive ginger is not drought tolerant.

Crepe ginger, a ginger lily or shell ginger, is a flowering plant in the ginger family. The plant is native to Asia and blooms during the summertime. The flowers are white with pink or red streaks and have a crepe-like texture. The plant can be grown in pots or on the ground and prefers full sun to partial shade.

The Kahili ginger plant is a type of ginger that produces yellow flowers. It grows best in humid, tropical climates and is native to Hawaii and other Polynesian islands. The plant can grow up to six feet tall and has large, oblong leaves. The Kahili ginger flowers are yellow with purple stripes and bloom from June to September.

The Pineapple Ginger flower is a beautiful, fragrant bloom that can add a touch of tropical flair to any garden. These flowers are relatively easy to grow and care for and make a great addition to any landscape.

Red button ginger is a type of flowering ginger that is native to Southeast Asia. It is a popular ornamental plant and is often used in landscaping. The plant grows to a height of about 1-2 meters and has large, bright red flowers. The flowers are borne on long, upright stalks and have a strong, sweet fragrance.

Red button ginger is a relatively easy plant to grow and care for. It prefers warm, humid conditions and does not tolerate frost. The plant needs full sun to partial shade and well-drained soil. Water the plant regularly, especially during the summer months. Fertilize the plant monthly with a balanced fertilizer.

Torch ginger, or ginger flower, is a type of ginger grown for its ornamental value. The plant produces tall, cone-shaped, typically red, pink, or white flowers. Torch ginger is native to tropical regions of Asia and Africa and is commonly used in decorative arrangements in these parts of the world.

Torch ginger is not typically grown for its culinary value, as the ginger root is small and not very flavorful. However, the plant’s flowers can be used as a garnish or flavour enhancer in certain dishes. White ginger (Hedychium coronarium) is a flowering plant in the ginger family Zingiberaceae, native to the eastern Himalayas. It is widely cultivated in tropical and subtropical regions for its fragrant flowers, which are used in leis, perfume, and aromatherapy. The plant is also known as ‘butterfly ginger’ due to the shape of its white flowers, which resemble butterflies.

Ginger flower colour can be significant when choosing ginger for your garden. The most common ginger flower colours are yellow, red, and white. Each colour has its meaning and can be used to convey different messages.

The colour red is often associated with passion, love, and desire. So it’s no surprise that the meaning of red ginger flowers is also linked to these concepts. In some cultures, ginger flowers are gifts to express romantic sentiments. If you want to add a little spice to your relationship, consider giving your loved one a bouquet of red ginger flowers!

Of course, red can symbolize other things, such as anger, danger, or good luck. So it’s essential to consider the context in which you’re giving ginger flowers before deciding on their meaning.

The white ginger flower is a symbol of purity and innocence. It is also associated with new beginnings and fresh starts. This flower can be given as a gift to someone who has recently gone through a difficult time in their life or as a way to wish them well on a new endeavour.

Yellow ginger flowers symbolize happiness and good fortune. They are often used at weddings and other special celebrations. Yellow ginger can also be used in cooking, either as a flavouring or as a decoration. The flowers can be dried and used in potpourri for sachets.

To care for the Ginger flower,

The ginger flower is easy to grow and care for. With a bit of attention, you can have stunning blooms in your garden all season long! Flowering ginger should be pruned after flowering has finished.

Ginger flowers can be propagated by division or by seed.

To Pot and Repot the Ginger flower:

The ginger plant does not need to be repotted often, but it may need to be repotted every few years if it becomes pot-bound. If you notice that the plant is not growing as well as it used to or the leaves are beginning to yellow, it’s probably time to repot.

Overwintering is the process of protecting ginger plants during the colder months. This can be done by mulching heavily, covering the ginger with a tarp or cloth, and bringing the ginger indoors.

These are the uses of the ginger flower.

The ginger flower is a popular spice in many cuisines. It has a strong, pungent flavour that can add zest to dishes. The flowers can be fresh, dried, or ground into a powder. Medical Use Of Ginger Lily

The medical use of ginger lily is as an anti-inflammatory, analgesic, and antipyretic agent. It has been used traditionally to treat headaches, arthritis, and fevers. The herb is also effective in treating nausea and vomiting. In addition, ginger lilies have diaphoretic properties that make them helpful in treating colds and flu.

Ginger lily is considered safe for most people. However, pregnant women and nursing mothers should avoid using the herb. People with bleeding disorders or taking blood-thinning medication should also avoid ginger lilies.

The following are the exciting facts about the Ginger flower:

So that’s it for the ginger flower! Be sure to check back soon for more information on growing and caring for this plant. Thanks for reading!

How long do ginger flowers last?

Ginger flowers can last up to two weeks, depending on the weather. If it’s hot and humid, they will start to wilt sooner. If it’s cooler or drier, they will last longer.

What can a ginger flower be used for?

Ginger flowers can be used for a variety of purposes, including as a herbal remedy for nausea and vomiting, as a tea for relieving indigestion, and as a spice in cooking.
Ginger flowers are also sometimes used in perfumery to make scented oils, and they can be added to potpourris or dried arrangements. Additionally, the flowers can be distilled to produce an essential oil that has a spicy, woody aroma.

How long does ginger take to flower?

The ginger plant will flower when it is about 12-18 months old. It will take about 9-10 months for the rhizomes to grow to a marketable size. Once the ginger flowers, the plant will die and a new one will have to be planted.

How tall do ginger plants grow?

Depending on the variety, ginger plants can grow up to 3 or 4 feet tall. But they can also be grown in pots, so you can keep them shorter if you prefer.

Yes, ginger lilies are poisonous. The plant contains a glycoside called Convallatoxin which can cause heart problems and even death. It’s important to keep children and pets away from this plant as it is highly toxic.

Do all ginger plants bloom?

Ginger flowers are beautiful, delicate and fragrant. Each blossom is about an inch in diameter and has four white petals with a small orange spot in the centre. The plants can grow up to six feet tall, but the flowers only bloom for a day or two. After blooming, the flower stem dies and a green seed pod forms. The pods burst open, scattering the black seeds across the ground.

How do you keep ginger flowers fresh?

Keeping ginger flowers fresh is easy. Simply place them in a vase or jar of water and store them in a cool, dark place. Change the water every few days, and they should stay fresh for up to two weeks.

Yes, ginger flowers are edible. In fact, they’re quite delicious! They have a slightly sweet, floral flavour and can be eaten fresh or cooked. Ginger flowers are a great addition to salads, stir-fries, and desserts.

Yes, ginger flowers smell. In fact, the fragrance is often used in perfumes and aromatherapy. Ginger flowers are also edible and can be used to make tea or added to salads. The petals are a beautiful pink colour and have a slightly spicy taste.