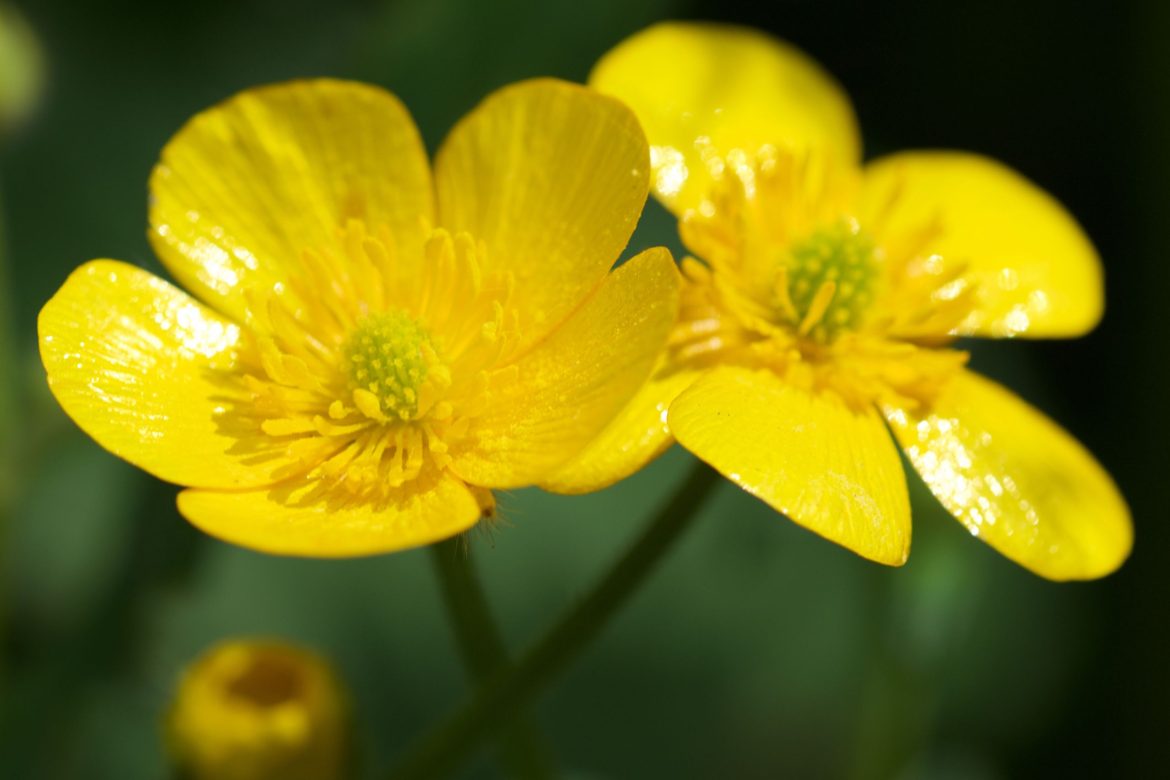 Buttercups are one of the most popular and well-known flowers in the world. They are often associated with happiness and positivity, making them a popular choice for gifts and decorations. While buttercups are typically yellow or white, they can also be found in other colours, such as pink, orange, and red.

To learn more about buttercup flowers and their meaning, keep reading!

This flower is a small, bright yellow flower that belongs to the buttercup family. It is native to Europe and Asia and has been introduced to North America. It has a long history associated with love, happiness, and good luck.

The flower is most commonly found in fields and meadows. The buttercup flower is also a popular garden plant—the flower blooms in the spring and summer.

The flower is a member of the buttercup family, which contains about 600 species of flowering plants. The flower has a bright yellow colour and a butter-like fragrance. It is found in many parts of the world, including Europe, Asia, Africa, and North America.

These flowers are annual or perennial herbs with simple or compound leaves and cup-shaped flowers. The buttercup flower is named for its butter-like fragrance. Buttercups are found in many colours, including yellow, white, pink, purple, and blue. The most popular buttercup flower is the yellow Buttercup.

History And Origin Of Buttercup Flowers

There are over two hundred species of buttercups, with the most popular being the Ranunculus acris (standard Buttercup), Ranunculus bulbosus (bulbous Buttercup) and Ranunculus repens (creeping Buttercup). However, there are many more cultivars and hybrids available.

The most common type of Buttercup is the ranunculus acris, also known as the standard Buttercup. This Buttercup is a herbaceous plant that grows about 20-30 cm tall. The leaves of the plant are green and have a toothed margin. The buttercup flowers are yellow and have five petals. Peruvian buttercups are a type of buttercup flower that is native to Peru. They are known for their large, bright yellow petals and ability to grow in various climates.

Peruvian buttercups are large flowers with bright yellow petals. They are native to Peru and can grow in various climates.

The buttercup flower has two possible origins for its name. The first is that the name buttercup comes from a time when people believed that if you held a buttercup under someone’s chin, it would reflect butter on their skin. The second possibility is that the cup-shaped petals of the buttercup flower resemble small cups that were once used to measure butter.

The buttercup flower is a member of the buttercup family, which includes over 600 species of plants. Buttercups are found on every continent except Antarctica and come in various colours, including yellow, white, pink, and purple.

The uses and benefits of buttercup flowers are the following:

Buttercup has flower meanings that include richness, prosperity, and good fortune. Buttercups are also known to symbolize childishness, innocence, and purity.

These are the buttercup flower’s meaning and symbolism:

Pink buttercup flowers are often seen as a symbol of happiness and innocence. They are also sometimes seen as a sign of love and appreciation. Pink buttercups can be given to someone to show admiration or as a thank-you gift.

Purple buttercup flowers are often seen as a symbol of love, admiration, and respect. This flower is also known to have a powerful meaning in many cultures worldwide. The Buttercup is native to Europe and Asia and has been a popular choice for floral arrangements and bouquets for centuries. The buttercup flower is most commonly associated with the colour green. Green buttercups are said to symbolize new beginnings, hope, and renewal. In some cultures, they are also believed to bring good luck.

The buttercup flower is most commonly associated with happiness and positivity. In many cultures, the Buttercup is seen as a symbol of good luck and is often given as a gift to bring joy to someone’s life. The bright yellow colour of the Buttercup is also said to represent the sun, hope, and energy.

The Cultural Significance Of Buttercup Flowers

Buttercup flowers have cultural significance in many parts of the world. Here are some of the cultural importance:

The buttercup flower has been mentioned in various rhymes and games throughout history. For example, Buttercup is one of the flowers in the children’s game “Ring a Ring of Roses.” In this game, kids act out the rhyme by holding hands in a circle and passing around a buttercup. If someone gets the Buttercup, they are “it”, and the game starts over.

The Buttercup is also mentioned in the well-known nursery rhyme “Wee Willie Winkie.” In this rhyme, buttercups are used as a metaphor for bedtime. The buttercups represent the closing of the eyes, and the person being put to bed is urged to go to sleep so that the buttercups can open again.

The buttercup flower has also been referenced in the literature. In the book “The Secret Garden” by Frances Hodgson Burnett, buttercups are one of the first flowers that Mary Lennox notices when she arrives at her new home. Buttercups are also mentioned in the poems “To Daffodils” by Robert Herrick and “A buttercup’s yellow” by Emily Dickinson. In Persian Mythology, the Buttercup is known as the “flower of the sun.” This is because Buttercup’s yellow colour is said to represent the sun. The Buttercup is also associated with the Persian god, Mithra. Mithra is the god of light, truth, and justice. He is often depicted holding a buttercup in his hand.

The cultural significance of buttercups to native American origins is buttercups were used as a love medicine by the Chippewa tribe. Young women would place buttercups under their chin; if their chin reflected yellow, it meant someone loved them.

If not, they would go without buttercups for a whole year!

The Buttercup has a long and varied history with many different meanings attached to it. In Shakespeare’s play “A Midsummer Night’s Dream,” the Buttercup is associated with cuckoos and their eggs. This is likely because Buttercup’s yellow colour is similar to that of a cuckoo’s egg. In the play, the cuckoo is a symbol of deceit and infidelity. This is because cuckoos are known to lay their eggs in other birds’ nests, leaving the unsuspecting parent to raise their young. Thus, Buttercup came to represent false love and betrayal.

The buttercup flower is a popular choice for many occasions, including:

Buttercups are also famous for Mother’s Day and Valentine’s Day.

How to Grow and Care for Buttercup Flowers at Home

To grow buttercup flowers at home: So, that’s our comprehensive guide to buttercup flower meaning and symbolism! We hope you enjoyed learning about all the different ways this beautiful flower is interpreted around the world. From its traditional use as a sign of love and admiration to its more modern associations with childhood innocence, there’s no doubt that Buttercup has a rich and varied history.

Whether you’re looking to add a touch of buttercup-themed decor to your home or you’re intrigued by the many different meanings of this popular flower, we hope this guide has been helpful. Thanks for reading!

Why Is It Called Buttercup?

Buttercups are named for their butter-yellow colour. The name buttercup may also come from the old English word buttorfleoge, which means butter flower.

What Is The Spiritual Meaning Of A Buttercup?

The buttercup flower is a symbol of happiness and joy. In some cultures, it is also a symbol of wealth and good fortune. The Buttercup is popular for bouquets and arrangements because of its beautiful yellow colour.

Do Buttercup Flowers Bloom All Summer?

How Long Do Buttercup Flowers Last?

Yes, buttercup flowers can spread. If you plant buttercups in your garden, they may eventually apply to other areas of your yard. Buttercups can also spread through seeds that are transported by animals or wind. If you want to prevent buttercups from spreading, you can dig up the roots of the plants and dispose of them. You can also mow over buttercups to prevent them from spreading.

Is Buttercup Poisonous To Humans?

Yes, buttercup is poisonous to humans. Buttercup contains a toxin that can cause skin irritation, vomiting, and diarrhea.

What animals will eat buttercups?

Buttercups are poisonous to most animals, but cows and deer can eat them without any problems.
Buttercups produce a toxin called protoanemonin, which is harmful to most animals. However, cows and deer have a special enzyme in their stomachs that breaks down the toxin, allowing them to eat the buttercups without any problems. Other animals that can eat buttercups include horses, sheep, and goats.

Where do buttercups grow best?

Buttercups tend to grow best in moist, shady areas. They can also be found near water sources, such as streams and ponds.

Buttercup flowers are not rare. In fact, they are quite common and can be found in most parts of the world. They typically grow in fields, meadows, and other open areas where there is plenty of sunlight.

Is a daffodil a buttercup?

No, a daffodil is a type of narcissus flower, while a buttercup is a type of Ranunculus flower.
Daffodils are usually bright yellow or white flowers that grow in bunches. They have a trumpet-shaped petal and are often associated with springtime. Buttercups are smaller than daffodils, and come in a variety of colors such as yellow, orange, and red. They also have less symmetrical petals than daffodils. Buttercups typically bloom in the early summer.